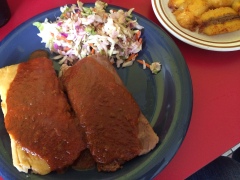 TAMALES, CURTIDO AND PUPUSA all represent the fresh, whole foods of Salvadoran cuisine. Mostly plant based with corn and beans eaten at almost every meal, El Salvador fare represents a variety of indigenous and Spanish cultures. Here in Metro Detroit, we have a wonderful Salvadorian restaurant called Pilar’s Tamales. I had the opportunity to visit their newer location in Warren.

Pilar’s Tamales of Ann Arbor opened a sister restaurant in early 2014. The location in Warren is known as Pilar’s Tamales East and has a homemade, local menu, just like the original, with stocks, salsas, sauces and salads all made from scratch. Pilar’s supports Michigan products when possible from places like Hampshire Farms, Tantre Farm and Van Houtte Farms.

On a very chilly January afternoon, Pilar’s East was jumping during the lunch hour. I acquired one of the few seats available and sat down to sample some of their traditional Salvadorian foods. The chicken pupusa—a thick, handmade corn flour stuffed tortilla—filled with chicken, cheese and house made refried beans was warm and filling.

I also choose chicken tamale that, specific to Salvador, is seasoned with chicken, olives, potatoes and capers and mainly filled with masa. Covering the tamales is their house made mild red chili sauce. In lieu of typical fried tortilla chips, Pilar’s prepares a side of curtido which is a vinegar based cabbage slaw. Fried plantains and yucca root are also a popular side comparable to American french fries.

Both locations have vegan and vegetarian options though only the east location is totally gluten-free. For a fresh and healthy Latin American food experience, check out Pilar’s Tamales in Ann Arbor, Warren and at Eastern Market on Saturdays. —Pam Aughe, R.D.

One thought on “Pilar’s Tamales East”