Many local orchards have an abundance of beautiful fall red raspberries ready to be picked right now. Available through the first frost, raspberries have a remarkably long picking season in spite of being quite perishable. Though only a few special places have a lesser-known berry—the golden raspberry. One such place is Erwin Orchards in South Lyon. 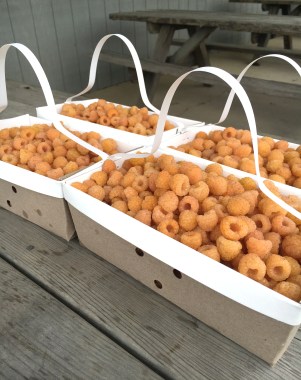 Erwin Orchards is a welcoming, expansive farm with u-pick raspberries, apples, cherries, asparagus and pumpkins. They have a bakery on site preparing—my particular favorite—pumpkin glazed donuts. Also available from the farm are honey, maple syrup, cider, apple butter and jam.

But, we were there for the golden raspberries. Carrying a basket in each hand, we headed out to the field. Our plan was to fill both baskets to the rim with raspberries while dreaming of preparing baked goods and jars of jam. Picking your own raspberries extends the freshness of this very fragile berry by going right from field to fork.

One thought on “Michigan Food Finds”